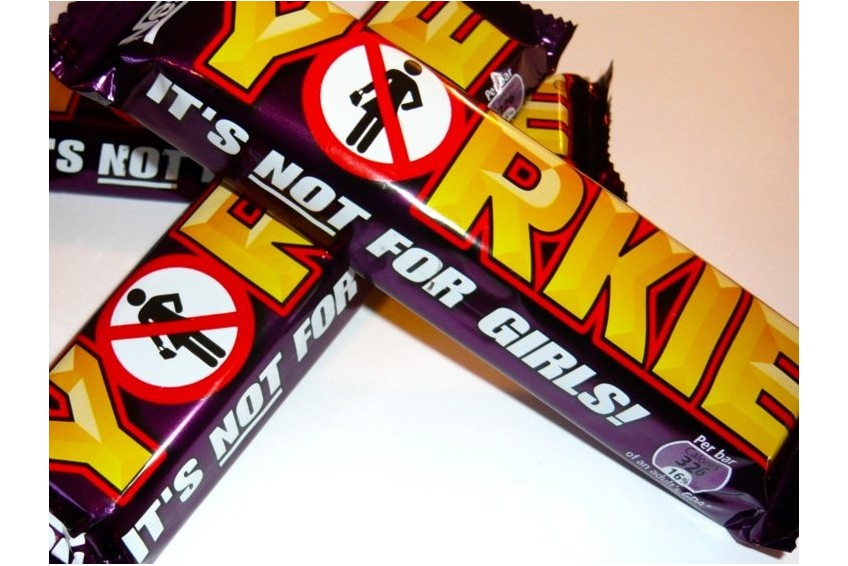 The Yorkie bar is famous in the UK for its former tag line: "It's not for girls." Nestlé first launched the slogans "Don't feed the birds," "Not available in pink," and "King size not queen size" in 2002, but the bar has always been targeted at men ever since its inception.

However, the manufacturers of the chocolate bar have now revealed that it could have been completely different. Rowntree's (later taken over by Nestlé) had many ideas for the how its solid chocolate snack would taste and be branded. Now Nestlé historian Alex Hutchinson has discovered various rejected designs and ideas and shared them in a blog post to celebrate the chocolate bar's 40th birthday.

Had it not been not been for associations with the Second World War, the bar would have been called "Rations."

Here's the story of how Yorkie came to be the first openly sexist chocolate bar.

Yorkie was almost called "Boulevard," according to Nestle.

The idea, which couldn't be much more different from Yorkie's blunt, macho marketing, was that the chocolate would be enjoyed instead of a cigarette after coffee. It was inspired by the "continental glamour" of France's cafe culture, explaining the drawing of the Arc De Triomphe.

The next idea was "Variety," inspired by the 70s version of "X-Factor," or "American Idol."

The port-flavored bar was inspired by 70s TV show "The Good Old Days," where performers and the audience dressed up as though they were Victorian. Its tagline was: "Positively packed with the palatable presence of priceless port wine."

The next idea was a peanut-filled "Pick-Me-Up"bar.

This could have had something to do with its humbug and treacle flavoring.

The winning idea was "Rations," a simple chocolate bar which would have tasted a lot like today's Yorkie.

"Rations" was meant for men. It was "to be eaten as a sustaining food, in the context of vigorous open-air activity."

However, "Rations" was eventually abandoned due to its association with wartime austerity.

So Rowntree's named the bar after its location: Yorkshire.

Like "Rations," Yorkie was intended to act as fuel during tough work. Its successful, early ads featured truck drivers.

Then in 2002, Nestlé owned Yorkie launched the aggressively macho campaign: "It's not for girls."

The "It's not for girls" line and the no women sign were removed from the packaging in 2012 and replaced with the slogan: "Man fuel for man stuff."

The controversial slogan was dropped years ago and has now been replaced with the word 'Original' printed on the side.

So, do you think the Yorkie chocolate bar was actually sexist or simply a very clever marketing ploy?